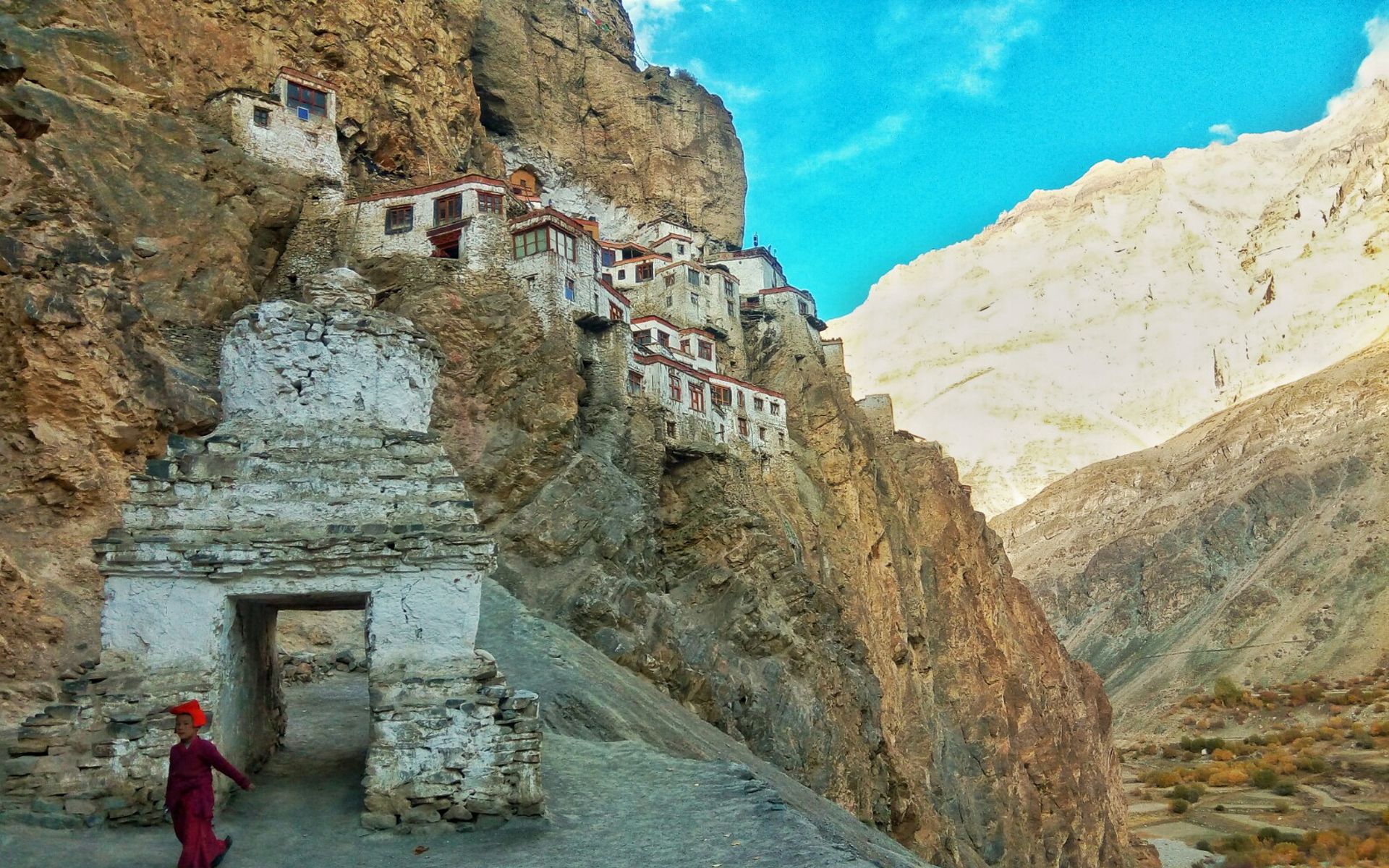 Zanskar lies to the east of Kargil, is an enchanting and yet home to some of the last few isolated valleys in the Himalayas. Zanskar means the land of white copper (Zan-copper and kar referring to white or snow). Zanskar is a long narrow valley tied between the mighty Zanskar range and Greater Himalayas. With an average of 3950m asl, the only motorable road to Padum, Zanskar administrative centre is from kargil.

The route is exquisitely placed with flourishing green fields in the Suru valley to the almost cinematic expanse of Rangdum, one of the first Himalayan Homestay destinations enroute to Padum. Further into Zanskar the fluttering flags, the serpentine Tsarap and the Zanskar leading into deep gorges and innocence of the people of Zanskar distinctly greet travelers in the Lungnak and Zanskar-Sham valleys located in the (south and north of Zanskar respectively ).

Himalayan Homestays in Zanskar include Rangdum, Pidmo, Karsha and Zangla.
Access to the region is seasonal (June – October) and requires a 250 kilometers drive from Leh to Kargil, after which you can continue straight to Padum, Zanskar’s administrative center, or make a stop in a Rangdum on route. 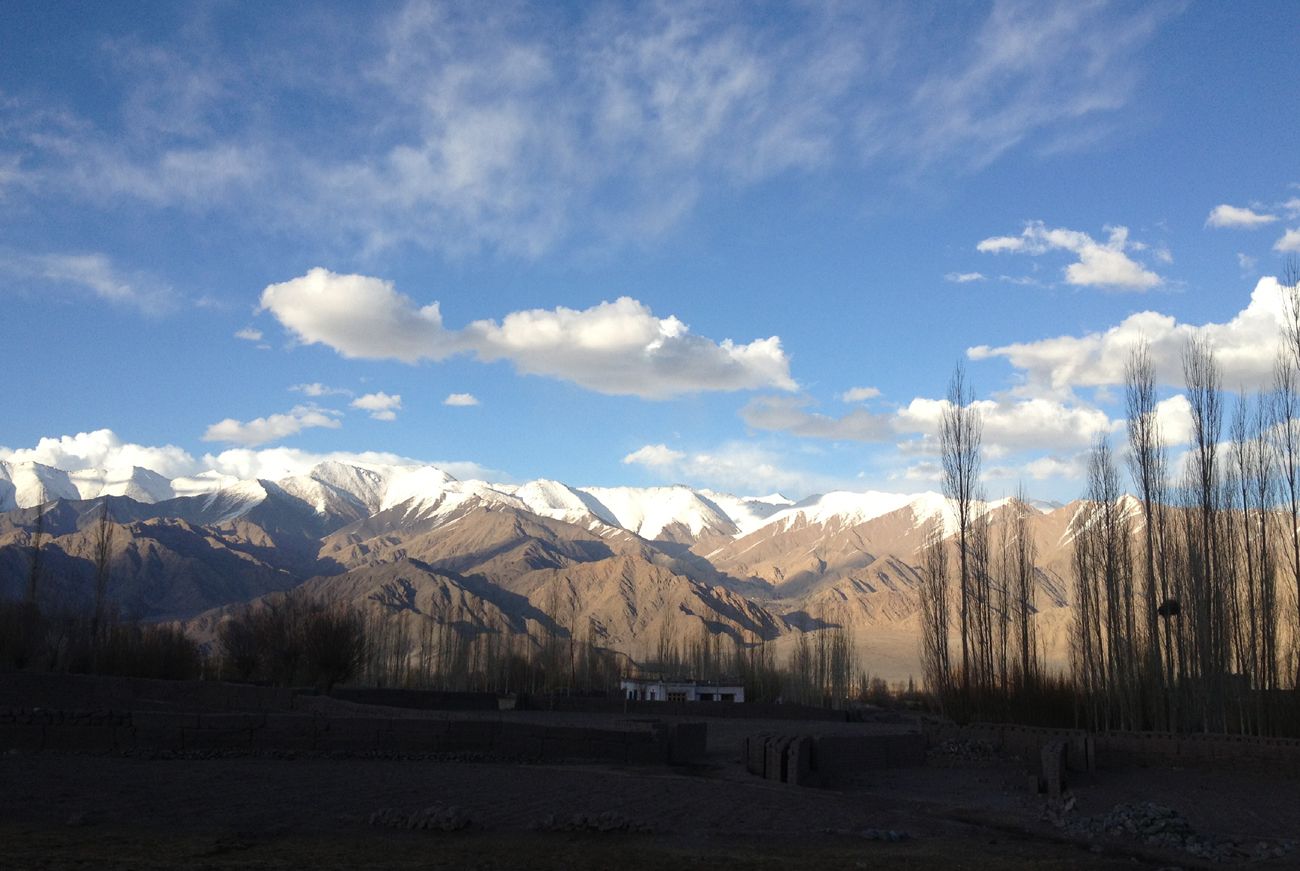 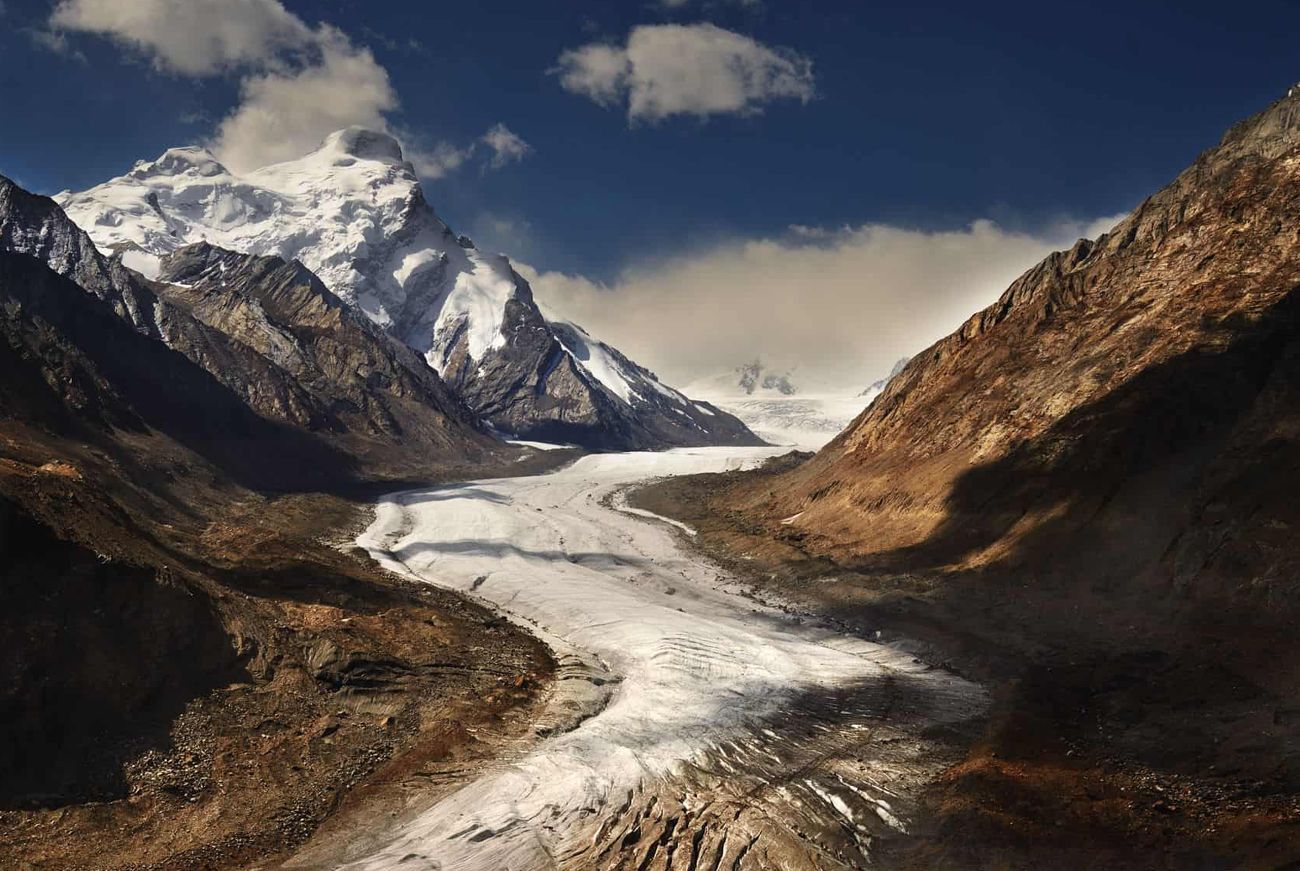 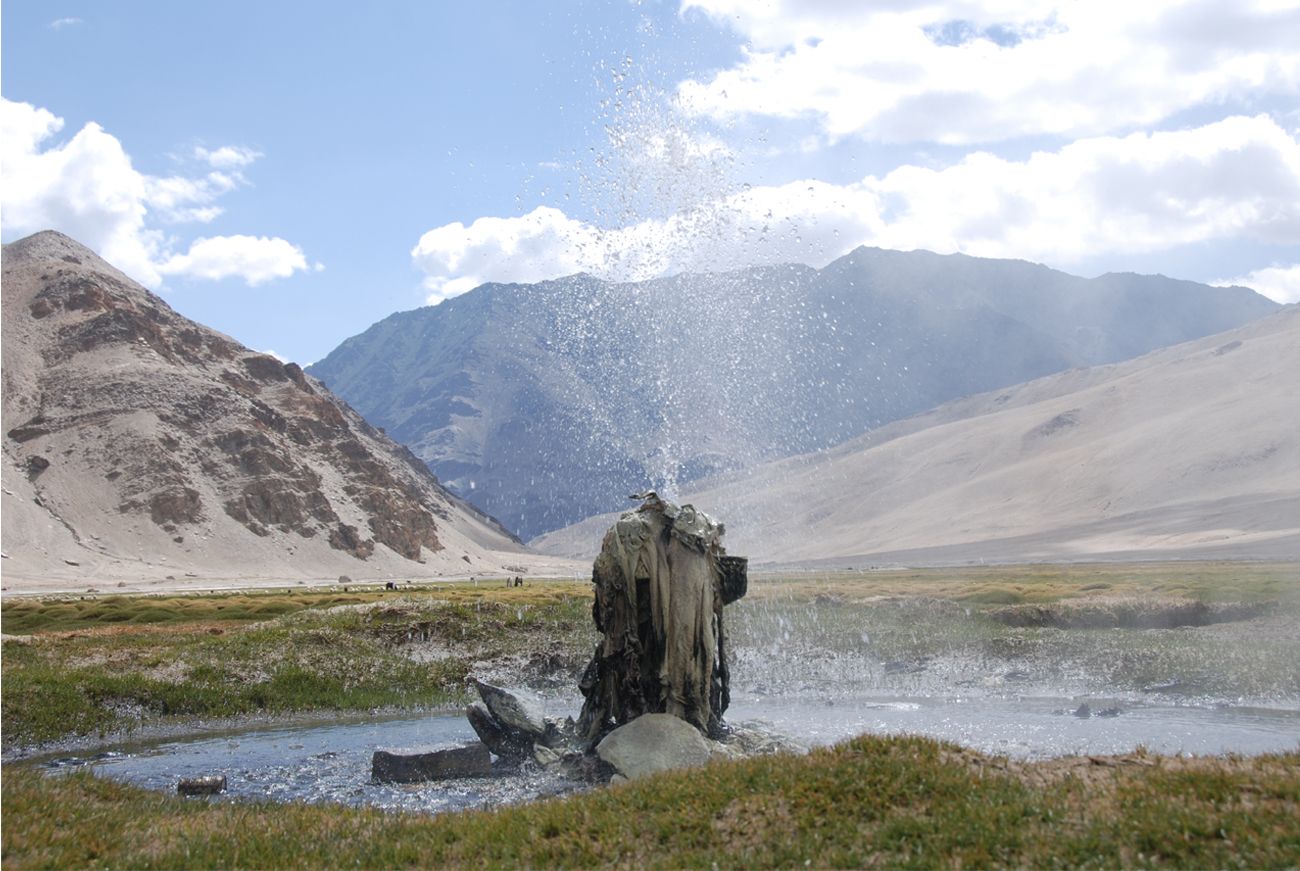 The most isolated of the Himalayan valleys, Zanskar is known for its exquisite monasteries, snow-capped peaks and stunning vistas. One of most fascinating attractions is a large rock emergence that is covered with hundreds of petroglyphs, some dated to be 2000 years old.

Lungnak Valley is a spectacular route. The route leading from Raru village to Phuktal monastery is moderately difficult. You will be trekking along the Tsarap River. This trail description leads along the eastern side of the river, but there is a trail along the western side as well. You may want to trek along one side on the way there, and the other side on the way back, as they offer different views of the canyon and quite a different trekking experience.

Ranging between 3700 and 4000 m, Zanskar is formed of three valleys: in the south-east towards Manali, the Lungnak; in the west, the Stod valley closed by the Penzil, source of the Tsarap River; and in the north, the Sham valley, cut by the Zanskar River down to the Indus. Padum is the main head quarter of Zanskar region. The Snow Leopard Conservancy India Trust and the Himalayan Homestay booking office is located in the main market, if you need any information regarding the Himalayan Homestay program or SLC-IT project activities. There are 52 Himalayan Homestays across 14 villages in Zanskar region.

Rangdum is located in the green and lush Suru Valley, presenting the mid-point on the road between Kargil and Padum. Isolated, wild and untouched, this village is a particularly scenic spot for a short break on the long journey from Leh to Padum. Surrounded by mountains and cliffs in all possible shades and colors, most prominent being the twin mountains Nun & Kun – both above 7000m asl. For wildlife lovers, this is an exceptional place for bird watching and Himalayan brown bears are known to inhabit the region. Rangdum is home to 25 households, two of which offer Himalayan Homestays.

At an altitude of 4000 meters, rangdum is relatively colder than the rest of Zanskar. This is an exceptional place for nature and wildlife lovers. The marshes of Rangdum host variety or water and grassland birds. The vegetation supports a thriving population of marmots and predators that prey on them. The Rangdum monastery boasts of beautiful religious art and its picturesque location on small hilltop is any photographer’s delight.

Anmu village is approximately 48 km away from Padum Zanskar town on right bank of the Tserap River. 5 families are residing and the village has Govt primary School. Anmu has natural spring water, which is also used to water the fields. Anmu has very good Snow leopard habitat. it has also Meditation cave. Motor able road until Anmu.

Cha village is Lungnak block head quarter. It is approximately 56 km from Padum Zanskar town. Cha has one of the famous petroglyphs sites in Zanskar. It is situated on the way of Phuktal Monestary.. It has small Lakhang(Protector) and Nunnery. Cha to Phuktal 2 to 3 hours walk.

Cha acts as block head quarter of Lugnak block. Cha offers a short trekking route to the famous Phuktal Monastery and one can find many petroglyphs peppered around the village. The villagers often sight snow leopards, wolves, ibex, blue sheep on the mountain slopes around the village.

Echar is another beautiful village in the Lungnak valley it is approximately 37 km away from Padum Zanskar town on the right bank of the Tsarap river, this village is hard to miss because of its unique perch on high slopes and the iconic statue of Maitreya Buddha. The statue towers upon the village that looks naturally fortified by mountainscape. The village houses old monastery and gives you a lot of opportunities to appreciate religious rock art. 42 families are residing and the village has Govt, High School, and Medical health centre.  It has very rich Flora and Fauna. We are able to see a Snow leopard very often specially in winter time.

The Phuktal Gompa owes its legacy to powerful and renowned scholars and teachers who resided in the cave, around which the monastery has been built, and has long been a place for retreat, meditation, learning, and teaching. This is reflected in its name Phuktal, which is derived from Phukthal, made up of Phuk meaning ‘cave’, and Tal or Thal meaning ‘at leisure’ in the endangered Zangskari dialect of the Tibetic languages. An alternate spelling of Phuktal is Phukthar, where Thar means ‘liberation’. Hence, the name Phuktal means ‘the cave of leisure’ or ‘the cave of liberation’. It is one of the few remaining monasteries in Ladakh that can still be reached only by foot.

Purne has long been known as the access point to the enigmatic Phuktal monastery. The village offers more than just a stop-over point to reach Phuktal, it is one of the most scenic villages located close to the confluence of Tsarap and the Kargyak river. The Lugnak river originates at this confluence.

Karsha lies across the Stod River from Padum. It is the site of Zanskar’s largest monastery, a striking structure composed of white-washed houses built upon a steep hillside. To the west of the monastery, you will find the nunnery, home to over 20 nuns and enigmatic temples dating back to medieval times. There are six Himalayan Homestays available in Karsha, and it presents a two hours’ walk or 20 minutes’ drive from Padum.

Apart from the fact that Padum is the administrative centre of Zanskar, its history dates back more than 8th century. With ancient rock carvings on banks of river, several chortens and Stakrimo Monastery, Padum has a lot to offer for anyone interested in the history and culture of Zanskar. Padum is located in central zanskar valley, also known as Zhungkhor. It is a central point connecting three valleys of Zanskar.

Pidmo is situated 7 kms from Zangla and acts as the starting point for trek over Parfi La. The village is fortified by huge mountain cliffs to the west and to the east it is cut through by Zanskar river. The villagers frequently sight snow leopards, wolves and brown bears on the mountain slopes.

Rinam is located left side of the Zanskar River toward Sham region in Zanskar which is 20 km far form Padum Zanskar. This village falls on the way on one of the famous trekking route Lamayuru to Darcha. The village satuated between Karsha and Pishu. Rinam is also good habitat of Snow Leopard, Ibex and other wildlife’s.

Shilla is situated right side of the Tesrap river bank and 6km from the Zanskar town Padum. Its one of the beautiful villages across Zanskar. Shilla has its own identity the beautiful waterfalls and lots of trees it shown unique beautiful specially in summer. Shilla is one of the high density of wildlife especially Snow Leopard and birds. Just above the village there one beautiful valley way to Shillaphu, its about one and half hours to walk. The valley toward Shillaphu is very beautiful and there is chance to see some wildlife including blue sheep and especially birds, we have one Himalayan homestay in ShillaPhu. In ShillaPhu six households. Around the Shillaphu also known for its rich medicinal plants value.

Stongdy or Tongdy is most popular for the Stongdey monastery which is located at a hilltop. It is the second-largest monastic institution in Zanskar Valley. The location of the monastery is picture perfect and offers a 180 degree view of the sham valley. The monastery itself has beautiful wood carving and exquisite paintings.

Zangla is the last village on the road from Padum. It is home to a charming nunnery set on a hillside one kilometer from the village, as well as the ruins of a palace that once hosted Alexander Csoma de Koros, author of the first Tibetan-English dictionary. You can embark on a scenic five to six hours’ hike from Karsha to get to the village, passing by Chetang, Karsha’s summer pasture, and the magnificent Stongdey monastery on route. There are a total of seven Himalayan Homestays in Zangla village. The Royal family still lives in the Zangla.